Mr Ayres said "We took the stadium policy to the 2015 election... I announced the first stadium policy in NSW in September 2014. We actually spoke about redeveloping the Sydney Football Stadium..."

Labor Leader Michael Daley and Labor Candidate for Lane Cove have rejected that claim saying that the knockdown and rebuild of Sydney Football Stadium in Moore Park – also known as Allianz Stadium - was not announced by the Liberal Government until September 2015, six months after the election.

In 2014, the Government only talked about “upgrading” Allianz Stadium as part of $600 million set aside in Rebuilding NSW funding (see over page).

The Liberal and National Government’s 2014 stadiums package was initially $600 million and increased to $2.7 billion by February 2018.

A knockdown and rebuild of Allianz Stadium at a cost of $730 million – which is what the Premier, Mr Ayres and the SCG Trust are proposing - was not on the cards at the March 2015 State election.

Mr Zbik said the 2019 NSW State election, on 23 March, should be a referendum on the Berejiklian Government’s mind blowing stadium splurge.

Four months from the NSW State election, and three months from Caretaker Period, Mr Daley is demanding that the SCG Trust and the Berejiklian Government immediately halt demolition of Allianz Stadium.

Mr Daley has given the State Government, the SCG Trust and the NRL ample warning that a Daley Labor Government will not give one cent of taxpayer money for a rebuild.

“It is simply not true that the Allianz Stadium knockdown/rebuild was announced before the 2015 election.

“Stuart Ayres is treating the people of NSW with contempt if he is going to try and pull the wool over our eyes and say that we have already had a chance to vote on knocking down and rebuilding Allianz Stadium.

“The only thing worse than blundering his way through a horrible and costly policy position on stadiums is that he continues to lie about it.”

“Labor is urging the Berejiklian Government to halt the demolition and actually give the people of NSW a vote – make the March election a referendum on stadiums.

“I’m hearing a lot of community anger about the scandalous waste of money on stadiums. Labor will spend that money where it’s needed – on schools and hospitals.” 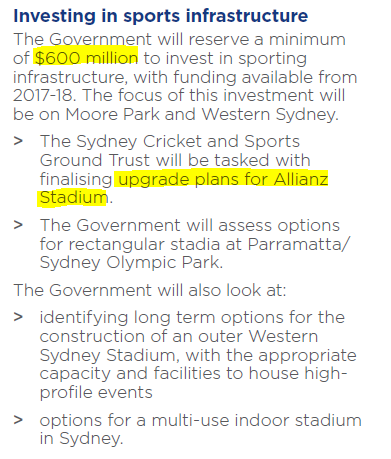