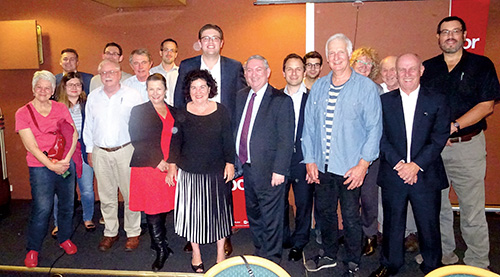 The forum was hosted by local Labor branches was held last Thursday, and attended by members of the community concerned about the proposed ‘Fit-For-Future’ reforms of the areas local Councils.

“The Fit-For-Future process has been chaotic at best.”

He noted that there no evidence anywhere that bigger is better when it comes to council sizes.

The recently elected Mayor of Ryde, Jerome Laxale, stated “This event showed that Labor is committed to local government reform, whilst keeping councils local.” Mayor Laxale is the second ever Labor Mayor of Ryde and the youngest Councillor to ever hold position of Mayor.

Mayor Laxale explained how Lane Cove, Hunters Hill and Ryde Councils have worked together on the creation of a Joint Regional Organisation. This organisation would formalise the co-operation between the Councils on select Local Government Services where cost efficiencies can be achieved.

Mayor Laxale stated “Neither Ryde, Lane Cove or Hunters Hill want to be amalgamated. It's time for Victor Dominello & Anthony Roberts to choose between their community or their party.”

“Joint Organisations are a great idea to help councils work together. But so far the Baird Government has refused requests from many metropolitan councils to form joint organisations” said The Hon. Peter Primrose MLC who supports the trial for a Joint Regional Organisation.