The Public Forum is online due to COVID :( For details - CLICK HERE 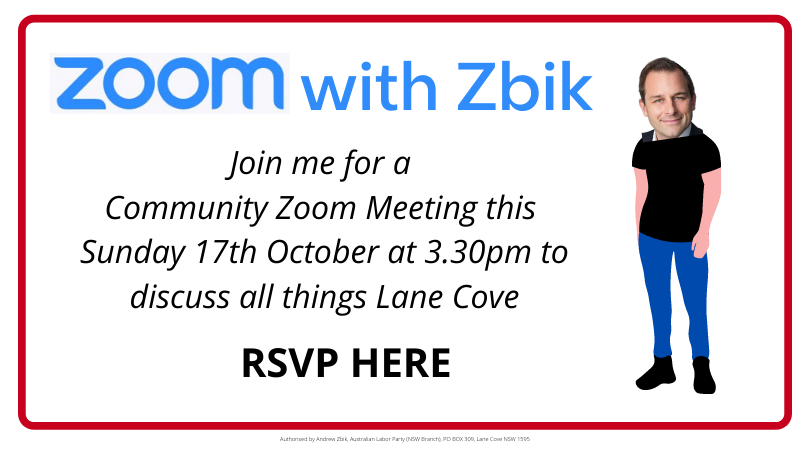 Below is a quick summary of the meeting agenda in writing

4. NOTICE OF MOTION - LANE COVE NORTH NEIGHBOURHOOD CENTRE My motion that Council write to landowners within the Lane Cove North area who own land zoned R4 who have not yet lodged a Development Application to ask their level of interest in developing a neighbourhood centre concept.

7. NOTICE OF MOTION - CREATION OF FUTURE INFRASTRUCTURE RESERVE Proposal that Council formally creates a reserve from the cash proceeds from the lease of 266 Longueville Road for the purposes of infrastructure investment.

8. NOTICE OF MOTION - LANE COVE SUMMER FESTIVAL Proposal that Council use unspent funds allocated for the Food and Wine by the River, Rotary Fair festivals for activities over the upcoming summer break.

14. PUBLIC ART IN BIRDWOOD LANE - PROGRESS REPORT An update on the public art around The Canopy.

15. PECUNIARY INTEREST RETURNS 2021 Proposal that Council note the Report and tabling of Pecuniary Interest Returns of Designated Staff and Councillors for the return period 1 July 2020 to 30 June 2021.

16. IPART REVIEW OF RATE PEG – POPULATION GROWTH IPART has completed its review of the Local Government rate peg to include population growth. The NSW Government adopted the final report’s recommendation to allow councils to increase the rate peg by a population factor in addition to the current Local Government Cost Index. This reform will see revenue per capita from Rates remain constant, rather than the current situation which sees revenue per capita decline as the population grows. It is recommended the report be received and noted.

17. COUNCIL SNAPSHOT SEPTEMBER 2021 Many examples of what Council achieved in the last month. The Lane Cove Gift Card which was an idea I presented to Council has passed $52,000 in funds spent within our local businesses since May 2019.

I hope you found this video and summary helpful.